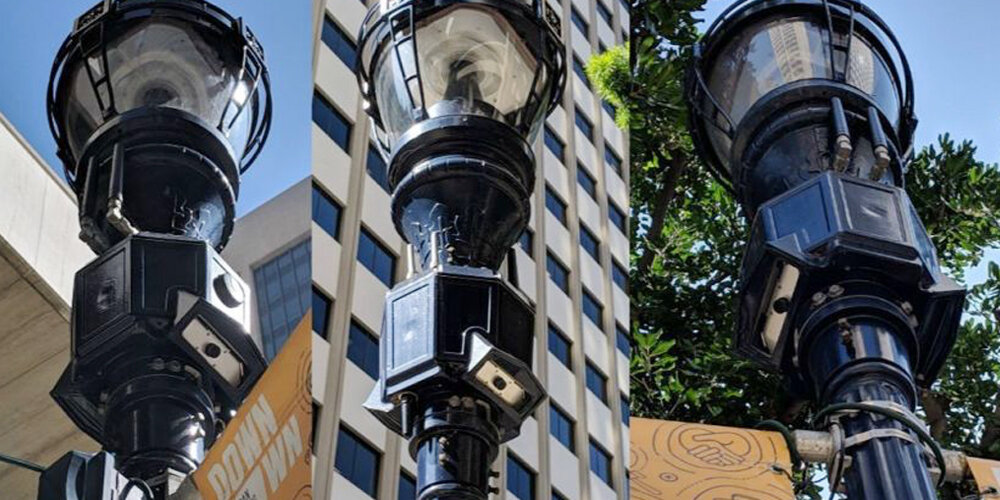 A coalition of community activists is demanding the city of San Diego seek an independent lawyer to advise officials on its “smart streetlights” program because City Attorney Mara Elliott owns stock in the contractor’s parent company.

The newly formed group, called Transparent and Responsible Use of Surveillance Technology, or TRUST San Diego, also wants city leaders to stop using and installing the equipment until they draft and adopt an ordinance addressing privacy concerns.

“This has been our request from the very beginning,” said Genevieve Jones-Wright, legal director at the Partnership for the Advancement of New Americans, a refugee-assistance group also known as PANA.

“The city has to stop using, acquiring and installing this technology unless and until there is a policy,” Jones-Wright said. “And the policy we want in place has to be an ordinance that includes a privacy advisory commission.”

Elliott is running for reelection. Her campaign officials have said the complaint about her stock ownership is politically motivated.

The Mayor’s Office issued a statement Tuesday noting that city officials met with the activists earlier this week to discuss issues related to the surveillance network.

“Attendees brought up a variety of concerns, however the conversation was primarily focused on strengthening and advancing the policy for committee consideration later this month,” said Christina Chadwick, a spokeswoman for Mayor Kevin Faulconer.

Jones-Wright said she and other coalition members are satisfied with the progress to date but additional discussions are being planned.

“I walked away feeling very positive about the meetings,” she said.

The coalition wants Elliott, the city’s highest legal authority, to recuse herself from any decisions related to the “smart streetlights” program because she reported owning up to $100,000 worth of stock in General Electric on her annual statement of economic interest, a mandated report that spells out the personal assets of public officials. GE owns the startup that has been installing the sensors.

“The city attorney’s glaring conflict of interest appears to be what’s preventing policymakers from addressing valid concerns about our privacy and civil liberties,” Jones-Wright said. “We have alerted the mayor’s staff that the city of San Diego must hire outside an uncompromised legal counsel immediately to address the issues with the city’s contract with GE.”

Instead, the office directed questions to Elliott’s political campaign, which said the conflict-of-interest allegations are untrue and are motivated by one of her rivals on the March primary ballot.

“Three different state laws make clear that Mara and her family’s GE stock, which they made a whopping $200 from last year, isn’t even in the ballpark of conflict of interest,” said campaign spokesman Dan Rottenstreich. “This is politics — not the law.”

Rottenstreich cited two sections of the state Government Code and a regulation of the Fair Political Practices Commission that say minor holdings in publicly traded companies do not typically constitute material conflicts of interest.

The Elliott campaign also pointed out that Jones-Wright works with Cory Briggs, a San Diego lawyer challenging Elliott on the March primary ballot. Briggs serves on PANA’s board.

“It’s a good thing Mara Elliott is the city attorney and not those shoddy lawyers who wrote this bogus complaint,” Rottenstreich said.

Jones-Wright said no one in the TRUST San Diego coalition works for Briggs, who is not even a member.

In late 2016, the City Council approved a $30 million investment in the development of 3,200 sensor-equipped street lights that would collect audio and visual data in real time. The information would help improve planning and public safety, officials said.

“Fostering innovation and improving infrastructure are important to enhancing the lives of all San Diegans,” Faulconer said after the council vote. “This new technology will give the city and developers the opportunity to make our neighborhoods safer and smarter.”

“No personally identifiable information is collected,” the city website states. “The city and private developers can only use the data for purposes such as improving traffic, parking, pedestrian use, cyclist navigation and weather.”

The city website acknowledges privacy concerns and lays out basic rules for handling the information collected by the surveillance system. The “note on privacy” says raw video and image data are not accessible to general city staff or the public and would be retained locally for five days before being overwritten or deleted, although police are given special access to the information to help investigate crimes.

Police have said street light data was reviewed in about 200 cases.

The privacy standards are subject to change based on feedback from the public, city officials say.

“As this is a new frontier in the technology world and in the city operations world, we expect to evolve this policy as we receive input from users and citizens,” the website states.

In October, after some community protest, City Council members Monica Montgomery and Chris Ward joined Council President Georgette Gómez in calling on Faulconer to stop the program until officials could adopt a more comprehensive policy governing how the data would be used.

“We must protect the civil rights and liberties of the residents of the city of San Diego,” they wrote.

Briggs was even more critical, questioning in a published opinion piece whether Elliott had done her due diligence in approving the GE contract, which allows the company to use and share data collected by the street sensors.

“In other words, the police aren’t the only ones who have your data,” Briggs wrote in the Times of San Diego last fall. “So do Wall Street and Big Tech.”

Gómez declined to comment this week. Montgomery issued a statement saying she stands with community advocates voicing concern over how the surveillance technology is being used.

“As policymakers we must work toward oversight solutions regarding this usage to ensure that the proper laws are in place to protect San Diegans’ right to privacy and our civil liberties,” she said.

Meanwhile the city isn’t adding to its smart street lights, though continues to receive data from them.

“While staff continues to engage with the community and bring forward a streetlight data use policy to the City Council, the City will keep its smart streetlight installations at its current number,” said Christina Chadwick, a city spokeswoman.

It was not clear Wednesday which committee of the City Council would take up the privacy concerns or when they would be debated in public.