The Mission Creep of Smart Streetlights 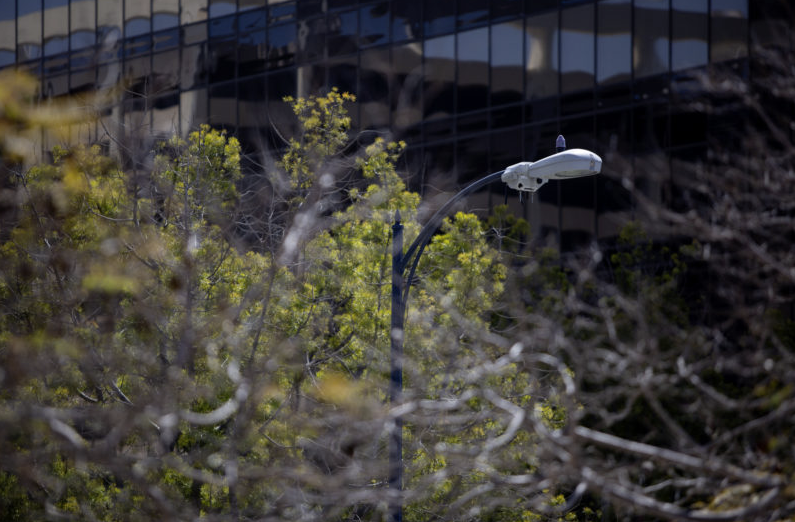 The Police Department has said it accesses smart streetlight footage only to help solve the most serious, violent crimes. Yet data shows SDPD has used the streetlights in cases related to vandalism, illegal dumping and destruction of city property.

It began with a deadly shooting at 5th Avenue and Market Street. In August 2018, the San Diego Police Department began requesting access to the cameras embedded in the city’s new streetlights to help solve a particularly grisly crime.

The definition of what constitutes a crime worthy of investigating with the aid of one of San Diego’s thousands of camera-equipped streetlights is growing, and there aren’t clear definitions in place.

“Once we were aware this technology could have been used to enhance investigations, we wanted to limit it to the most serious crimes in San Diego,” said Capt. Jeffrey Jordon, who manages special projects for SDPD’s chief, in June 2019.

As questions and criticism of the project began to swell last year, Jordon met with the City Council’s Public Safety and Livable Neighborhoods Committee. Elected officials wanted to know how the project had gone from counting cars to fighting crime, and what criteria would be used to justify the ongoing access. It had been sold in 2016 as a means of reducing energy costs and collecting environmental and transportation data.

As an example of the types of offenses SDPD was interested in solving through the streetlights, Jordon cited sexual assaults, car collisions that resulted in death or injury, and other violent crimes.

This position went all the way to the top. About six weeks ago, Police Chief David Nisleit highlighted similar boundaries in an interview with the Union-Tribune.

“We use [the streetlights] very sparingly, for only the worst type of cases, very violent type of cases, or serious or fatal injury collisions,” he said. “But it’s our ability to use them as a reactive tool, as an investigative tip to lead us in the path of who is responsible for the crime. It actually lets us narrow our focus.”

Indeed, SDPD has accessed the streetlight cameras to investigate these types of crimes across the city. Between August 2018 and October 2019, NBC 7 recently reported, investigators used the footage 175 times — primarily downtown and in southeastern San Diego, and primarily to help solve homicides, assaults, robberies and collisions.

But the data also reveal that SDPD has used the cameras since that murder in the Gaslamp on cases related to vandalism, illegal dumping and destruction of city property.

Last week, city officials offered up a policy related to the use of streetlight data, but it was rejected by the Public Safety and Livable Neighborhoods Committee because it didn’t go far enough. Committee members asked city staff to write a broader surveillance ordinance that would govern the use and acquisition of any future crime-fighting technology.

Allowing such “technology to show up in our neighborhoods unannounced and uncontrolled erodes trust between our communities, city officials and law enforcement,” said City Councilwoman Monica Montgomery, who chairs the committee.

City Councilwoman Vivian Moreno urged city staff to be intentional in whatever they end up putting on paper next.

“When there’s already an environment of distrust, we should be explicit about why we want these devices out there,” she said. “If the main purpose is to surveil the public’s right of way for the purpose of investigating crimes, we should just say so. Plain and simple.”

The tension on this topic has been simmering for nearly a year. In October, City Council President Georgette Gómez and others, including Montgomery, called for a moratorium on future smart streetlight installations until a comprehensive policy addressing the privacy and data concerns coming from their communities could be addressed. The policy for accessing the cameras had been written by the Police Department itself.

Then last week things took a strange turn when City Attorney Mara Elliott held a public press conference to make the case that the cameras were “a game changer” for local law enforcement. A few feet from where a security guard had recently died, Elliott got into a heated debate with the same activists she’d accused of misrepresenting the streetlight program and her involvement in it.

Jordon told Voice of San Diego that SDPD decides which cases are worthy of pursuing through the streetlights on an individual basis, and the mission is always the same — to protect life and property with potential for serious loss.

“We believe these cases do when [the] context is understood,” Jordon wrote in an email.

He gave some general descriptions of each. The vandalism cases that appeared in NBC 7’s data involved a BB gun, blown-out windows across the city and more than $100,000 worth of damage, Jordon said. The illegal dumping involved concrete dumped near an FBI parking structure in Sorrento Valley. Elsewhere, a suspect had cut the electrical lines to the streetlights themselves, putting people at serious risk of collision, he said.

Jordon did not respond, however, when asked for a clearer definition of “serious.”

Geneviéve Jones-Wright, one of the activists pushing for a wider surveillance ordinance, declined to say how the streetlights should and shouldn’t be used or restricted. A working group made up of community members, technical experts and police should craft reasonable rules together, she said.

But the danger of the current process, she added, is that it risks undoing the relationship-building between SDPD and communities in recent years.

“When you go outside this ‘serious case’ rubric, you’re setting up a system that’s open to casual access and you displace community-based policing practices,” she said. “You’re taking out of the equation officers who are walking the beat and talking with witnesses and answering their questions — the things we think about with criminal investigations. You’re just gonna be eyes in the sky.”

Two outside experts said San Diego appears to be experiencing mission creep with the smart streetlight program — a phenomenon often seen in military campaigns in which the original focus drifts into new terrain. What started as a tool for city planning quickly became a tool for law enforcement. Now the justification for what constitutes a “serious” crime is starting to expand.

Whenever the watchers are watching themselves, it helps to have an external process, said Rachel Levinson-Waldman, senior counsel to the Brennan Center for Justice’s Liberty & National Security Program at NYU.

“Ideally, it’s the City Council and public input that has some ability to take a step back and help make those considerations, not just from the point of view of ‘we want to solve all the crimes possible as quickly as possible.’ There’s certainly value in crime deterrence, but there are other values to consider as well,” she said.

Privacy is one and equitable policing is another, and it’s worth “having a body that can weigh all those things and be in a position to put restrictions and processes in place,” she said.

Brian Hofer, who chairs the Oakland Privacy Advisory Commission and helped write several surveillance ordinances in the Bay Area, said the point is to allow the public a forum to ask hard and candid questions before any proposal ever reaches a legislative body.

If police want to use a new piece of technology to solve a murder, that’s probably fine, he said, but the same urgency doesn’t automatically apply to a petty theft.

“Those are the kinds of conversations you have at a privacy commission and you weigh the loss of privacy and civil liberties against the severity of the crime,” he said. “Reasonable people will say, let’s chase down homicide and sexual assaults and kidnappings, and all those terrible things. Where people have different opinions are on the smaller, minor stuff.”

The rollout of San Diego’s streetlight program was misleading at a minimum, he said, and now it’s up to officials to put together clearer guidelines. Without them, he said, “all sorts of mischief could happen.”